Why I Disagree with the People You May Know LinkedIn Feature

People you may know on LinkedIn.

Is this feature EVER useful?

Where is the Feature Located?

Found when you’re on your ‘My Network’ tab on LinkedIn, the platform will tell you how many mutual Connections you have in common with the people it suggests you Connect with and present you with a Connect button underneath their Profile images. LinkedIn also suggests ‘People you may have worked with’ and ‘School alumni you may know’. Scroll down and you’ll see a section called ‘More suggestions for you’ with another ‘People’ tab recommending more people the LinkedIn platform believes you should Connect with.

Whilst the ‘Groups’, ‘Companies’ and ‘Hashtags’ tabs in the aforementioned section can sometimes prove insightful I tend to take the following approach when deciding who to Connect with:

Occasionally, when deciding to accept or reject a Connection request, I use the 3rd option and send the person wishing to Connect with me this message:

“Before accepting your kind invitation to connect, may I ask what it is about my profile that attracted you to wish to connect?”

“Because LinkedIn told me I knew you!”

Flip the scenario around, would you ever accept a Connection request from a stranger, who provided no context as a basis for their request?

Just in case you are wondering too – I can’t recall EVER using this feature to decide whom to connect to.

I can recall on very few occasions the feature ever showing me anyone I was actually likely to know!

I want to be in control of my network.

Am I alone? Have you found this people you may know feature useful? 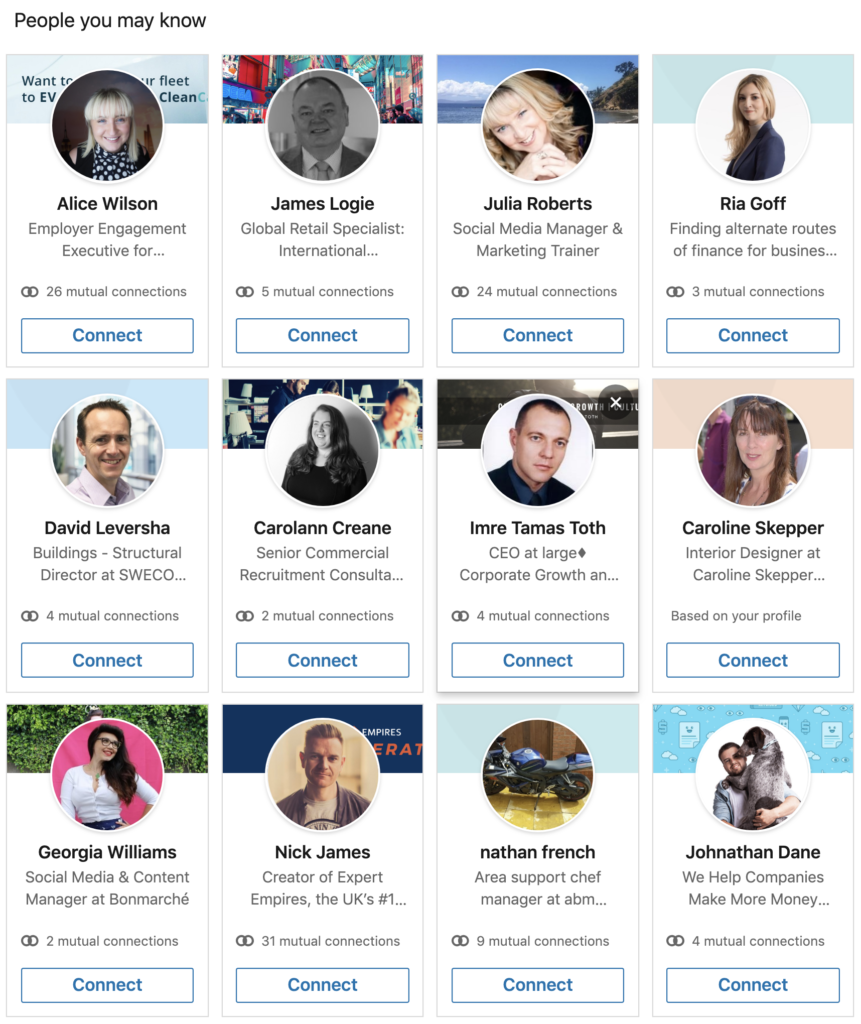 What My Connections and the LinkedIn Community Said When I Asked:

To kick the conversation off to an interesting start, Ursula McBride, an experienced sales professional in the postal distribution and print sectors, answered my question with:

“Nigel, it may depend on what level contacts have paid for on #LinkedIn? I sometimes get ‘contact can introduce you to ‘contact’ and in some cases, they are relevant potential connections.”

This actually resulted in me having more questions. I’m not too keen on the ‘contact can introduce you to this contact’ feature. I’d like to be in control of who I recommend unless I’ve missed something? Also, I wonder how what people have ‘paid for’ on LinkedIn influences how they get recommended to others and who they see in their Connection suggestions?

Stewart Harper provided an example of when the feature had proven useful:

“I’ve occasionally found it useful, if a former colleague wasn’t previously on LinkedIn it has sometimes suggested them to me soon after they’ve joined….. but 95% of the time, not!”

Lorenzo Castillo, a Software Engineer at LinkedIn, shared that he has found many old classmates and colleagues using this feature, whilst networking event organiser, Tracey Earl thought it was handy when she first started using LinkedIn and was trying to grow her network but she tends to not use it now. Billy Gierson, Director and experienced Facilitator at Perth Innovation Ltd reported a similar experience:

“When I first started using LinkedIn I found it very useful for finding people I had lost touch with, but over the years I have found it less and less useful.”

Meanwhile, Managing Director at AQR, Doug Strycharczyk stated that he never uses the feature, Marketer, Sonia Begum declared she believed the feature is never useful and Customer Journey Mapping expert Nigel Greenwood told me he is among those who never make use of it.

“Interestingly Nigel having never bothered before, in recent months, I have looked at ‘People you may know in a similar role’ and also ‘Other suggestions’ and found a few people of relevance to connect to. Do you know what factors/algorithm is used to decide who gets suggested here?”

Unfortunately, I don’t know how the LinkedIn algorithm works but wish I did!

I just thought I’d ask if anyone found the people you may know feature because one day, I might ask LinkedIn to offer something a little more useful!

I want to control my connections and relationships on LinkedIn.

Pro Tip: The key to succeeding on LinkedIn is to engage. LinkedIn’s new algorithm updates also mean the platform elevates content users are most likely to join in the conversation about and will give greater visibility to conversations with things that encourage a response (like opinions). So, asking your network intelligent and relevant questions like the one I asked enquiring into whether people found the people you may know feature useful, shows you value their opinions and works a trick at generating Comments and opening a dialogue.

Nigel’s LinkedInCredible Training Programme is nothing short of a revelation – a real eye-opener. Nigel’s knowledge, passion and enthusiasm for this platform inspires you to… Read more “Simon Carin”

I have just completed Nigel’s excellent LinkedInCredible Training course and wanted to say what a great job he does. Over a few weekly sessions, he… Read more “Gary Palmer”

It was like I had a light-bulb moment – suddenly all came clear. My time spent on LinkedIn will never be the same again.

I hadn’t appreciated just how important a good profile is on LinkedIn, even though I am rarely on the platform

Nigel’s course covered all the steps necessary for effective use of LinkedIn. Even before the course finished I generated new business and am continuing to… Read more “Alicen Thorn”

I enjoyed listening to the APC-NYC (Advertising Production Club of New York) webinar you did this evening. Thank you for continuing to share tips to… Read more “Jenny Haase”

Jenny Haase
Kindness From the Heart

I highly recommend Nigel’s training – be that in a group or bespoke – to advance your understanding of LinkedIn. His years of expertise and… Read more “Dr Katerina Steventon”

What a great webinar you have just delivered. Thank you so very much Nigel Cliffe. There were some tips in there that I had wondered… Read more “Sue Schoormans”

Nigel’s course was so valuable to me, I carry the hand-written notes I took on his training course with me everywhere I go, in the… Read more “Bootcamp Attendee”

My Linkedin training with Nigel Cliffe was 7 years ago (I can’t believe it Nigel) and it blew my mind. He’s a master. It’s a… Read more “Lindsay Cameron”

Lindsay Cameron
The Next Steps

I thought your session was one of the most useful aspects of the career development programme on the MBA.

I particularly enjoyed learning about how to post news and items of interest to my target audience so as to instigate fruitful discussions, which will… Read more “Bootcamp Attendee 4”

Just wanted to let you know how insightful I found your recent online talk for the University of Leeds. You used my profile as an… Read more “Daisy”

Hi Nigel, thank you so much for your training session! A person I met at an event connected with me through LinkedIn, thankfully I’d already… Read more “Sarah Hough”

A huge thank you for such an exceptional course over the last 7-8 weeks. The combination of a clearly effective LinkedIn Marketing model, literally dozens… Read more “Julian Bridgewater”

After posting my first video last week, I am totally shocked at how many views and comments I got considering how I rushed doing the… Read more “Moona Karim”

I’d like to congratulate you on delivering a great course. It has something for everyone, whether they’re completely new to LinkedIn or they’ve used it… Read more “Phil Turner”

“Thanks for this thought provoking and easy to follow guide. I’ve got a completely different outlook on how I can use social media more effectively… Read more “Richard Harrison”

I thought I was a pretty proficient LinkedIn user until I met Nigel. However, I hadn’t converted any new business. Within two weeks, yes, just… Read more “In-House Training Attendee”

I grasped, for the first time, how much time I have wasted in the past on LinkedIn, not having a cohesive strategy. From today, I… Read more “In-House Training Attendee 4”

The webinar was incredibly useful, thank you so much – lots of food for thought and I will certainly be taking action on my own… Read more “Sharon Booth”

WOW! I’m someone who loves the makeover TV programmes, where there is a lot of hard work, then you see an incredible reveal and are… Read more “Rachel Oates”

I’ve just completed a seven-week training course with Nigel around how to operate on LinkedIn, and I must say it has certainly opened my eyes… Read more “Chris Hopkins”

Need to generate warm leads through LinkedIn? My answer to this was “of course” so I attended one of Nigel’s LinkedIn Bootcamps yesterday at Cloth… Read more “Dean Towers”

Thank you for the last session today. My LinkedIn SSI Score has doubled from when I started your LinkedInCredible Training course! Many thanks for… Read more “Zoe Timmins”

Firstly, I want to say how much both George and I enjoyed the course, what was fortuitously a fun team and how useful and informative… Read more “Jonathan Marks”

I cannot recommend Nigel’s LinkedInCredible Training Programme highly enough. Nigel’s knowledge of LinkedIn is truly incredible and the course takes you on a journey that… Read more “Alastair Deards”

Thanks for a very useful course. It is just what I needed to allow me to build my network and prospects. I now have a… Read more “Peter Cranston”

Why follow this LinkedIn leader, Nigel Cliffe? Because he does the following: ✅ LinkedIn coach, mentor, & consultant
✅ Creates content that is valuable… Read more “Gillian Whitney”

Just a quick note to say how much I enjoyed the webinar yesterday morning. You have such an engaging style, easy to listen to, even… Read more “James Richardson”

This morning’s [Top Tips to Improve Your LinkedIn Profile] webinar was absolutely awesome; a revelation for me personally.

It’s obvious isn’t it? Get onto LinkedIn and promote your business! But how? I attended one of Nigel’s one-day LinkedIn workshops to find the answers… Read more “Martin Stiven”

Nigel’s course was so valuable to me, I carry the hand-written notes I took on his training course with me everywhere I go, in the… Read more “Jeremy Meadowcroft”

I thought the LinkedIn bootcamp would move me from zero to hero. It was better than that. Small group, almost personal training and excellent tuition.… Read more “Bootcamp Attendee 2”

Enquire about a LinkedIn training programme tailored for you